NFT as Our Virtual Digital Future. What Is It? How Can You Earn Money On It? What Cool Projects Already Exist in Ukraine?

NFT guide from Kevuru Games specialists: key definitions, areas of use, distribution in Ukraine and the world, and current NFT projects of the company – on medium.com

Below you can see the beginning of the article.

You’ve probably already heard about NFTs, even if you haven’t specifically searched for information about it. For example, a photo of Viktor Medvedchuk, Vladimir Putin’s godfather and a traitor to Ukraine, dressed in the uniform of the Armed Forces of Ukraine in handcuffs, was turned into a pop-art collage and minted as an NFT. Medvedchuk in this form was put up for auction. The starting price is 0.1 Ethereum ($311). Online auctions will run until April 27th.

Specialists of the Kevuru Games studio have prepared a whole guide for NFTs on a global and local scale. We will tell you where it comes from, where it is used, why it causes such a buzz and what NFT projects have already been implemented by the studio.

NFT in a Nutshell

The term NFT is becoming more and more common. Game companies are actively using the opportunity to create NFT-oriented games, where players buy up game items three years before release. Art, music, and even memes in the form of NFTs are selling like hot cakes for crazy amounts. And many clutch their heads because they do not understand what on earth it is.

NFT is a non-fungible token: each instance of it is unique and cannot be exchanged or substituted for another token. In fact, such a token is a digital certificate stored in the blockchain and certifying ownership of a certain unique object.

NFT captures such components of digital items as owner, origin, authorship, transaction history, etc. The main value of NFT is that it is both a confirmation of the authenticity of an object and a method of securing ownership of it.

NFT technology was created in 2017 based on Ethereum smart contracts. And the first tangible piece of art turned into an NFT was a black-and-white work by artist Banksy called Morons. The digital asset was tied to the original, and the original itself was burned. It is quite a spectacular start to the triumphant march of NFT around the world, isn’t it? From Design to Implementation: A Guide to Creating Game Audio
1 min
153 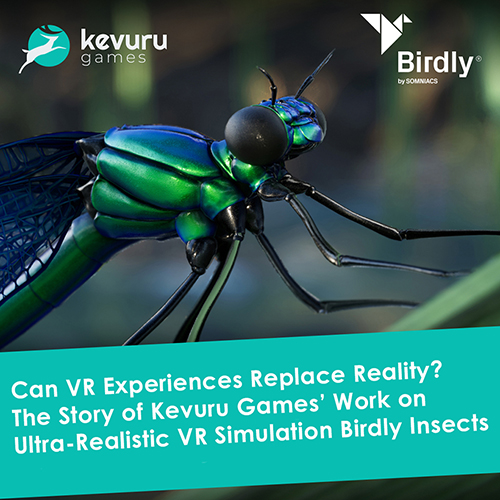 Can VR Experiences Replace Reality? The Story of Kevuru Games’ Work on Ultra-Realistic VR Simulation Birdly Insects That Offers Visitors the Role of a Butterfly
1 min
150 Building up the Image of Ukraine. Interview With Olena Butenko, Kevuru Games Manager
3 min
198
Subscribe Us